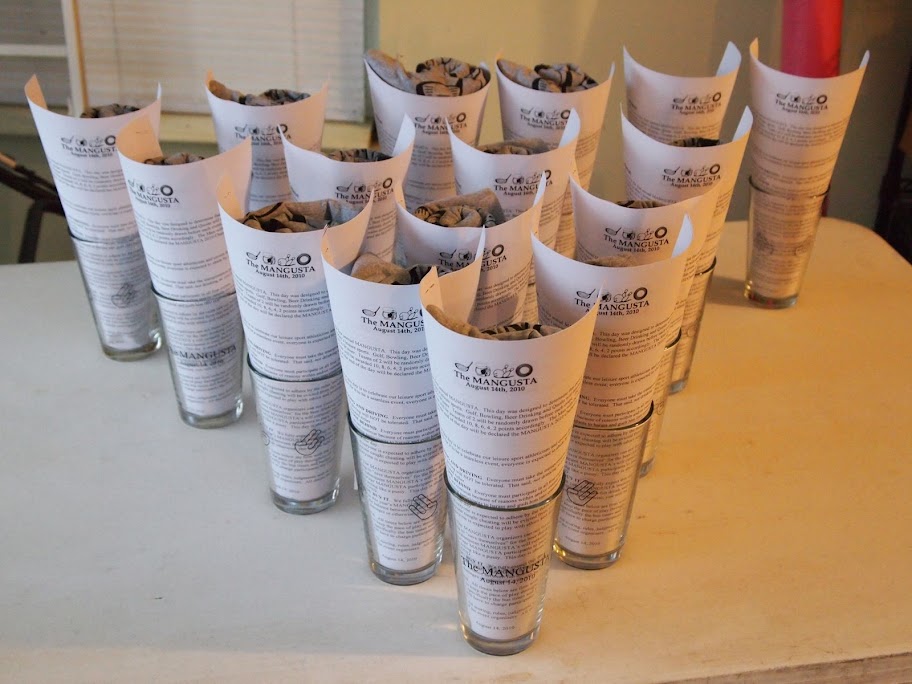 The Mangusta creators thought tirelessly to come up with the perfect blend of leisure sports that challenged both mind and body.  Played independently of each other, these activities may not break the sweat of even the daintiest of Man; but played out over the course of a single day with endless free flowing beer and blistering summer heat, we guarantee these four hand selected leisure sports will challenge even the most rugged of men.

The 2011 Mangusta events and formats will be: 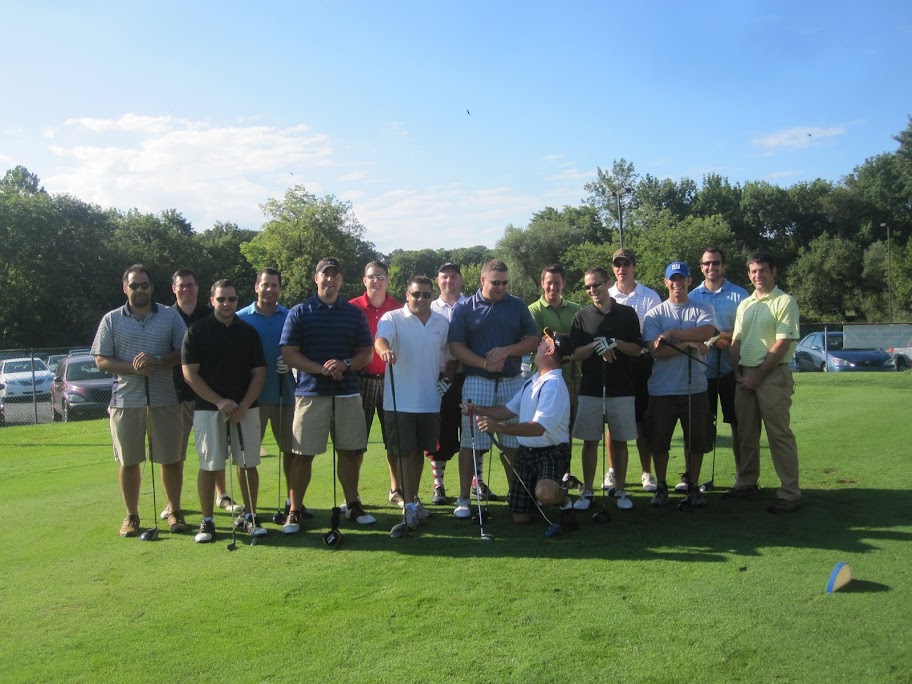 Names will be drawn at random to create teams of 2.  2 teams of 2 players will create each foursome across 4 foursomes.  Each foursome will be given a tee time starting at 08:00.  The format will be 2 Man scramble and 2 mulligan/TEAM will be given- NO MORE.  We will be playing “winter rules” which means every player is allowed 1 club length relief for all shots but you CAN NOT improve your lie.  Each foursome is responsible for monitoring ethical play of all participants.  Any cheating or breaking of the aforementioned rules will be disqualified for this event and blackballed from all future MANGUSTA’s.  Low score determines winner.  The top 5 teams will be awarded points accordingly.  Any ties will be decided per golf hole difficulty.  Every team of 2 is expected to take the scores of their respective foursome meaning each foursome will hand in 2 scorecards to ensure accuracy.  Any and all disputes will be handled by The MANGUSTA organizers, all decisions final. 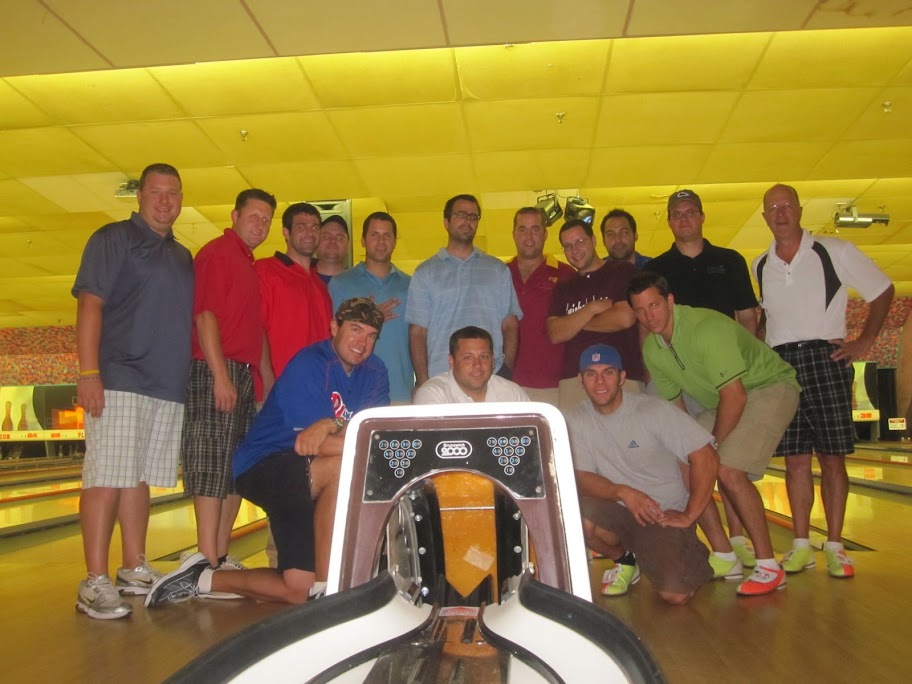 Names drawn at random to create teams of 2.  2 teams of 2 players will fill each lane across 4 lanes.  3 games will be played with the same opponents in the same lane.  Any computer error or score altering MUST be verified and confirmed by a MANGUSTA organizer.  Each lane is responsible for enforcing ethical play of his piers.  Any cheating or breaking of the aforementioned rules will be disqualified for this event and all future MANGUSTA’s.  High net score determines winner.  The top 5 teams will be awarded points accordingly.  Any ties will be decided per paper/scissor/rock.  Any and all disputes will be handled by The MANGUSTA organizers, all decisions final. 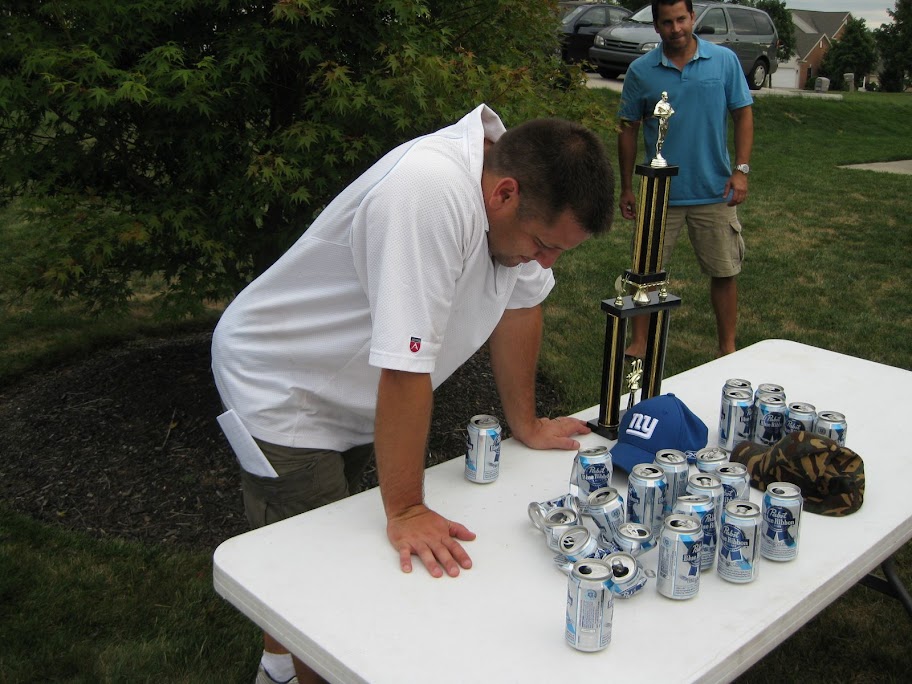 Names will be drawn at random to create teams of 2.  Each team will be given a 6-pack of chilled Pabst Blue Ribbon (PBR) Light beer.  NOTE: After countless hours of research, The MANGUSTA organizers have determined PBR Light to be the quintessential all day drinking beer and therefore no other beer substitutes will be allowed.  NO OTHER drinking vessel including cups, beer bongs, and funnels will be allowed.  No outside tool or instrument may be used to supplement or alter the can (i.e. no shot gunning).  It’s just you and the can, man.  Each team will be given no less than 5 minutes with their beer to optimize their preferred beer temperature.

Team of two will challenge another team of two with the remaining participants watching.  Teams on deck will be given stop watches to record time till all teams have a recorded time rounded to the nearest 100th of a second.  All other onlookers will be assigned to check for spillage and any other shenanigans.  At the official start, only then can the respective teams open their beer(s) and consume it as fast as they can.  Minor dripping will be allowed though each infraction of “spillage” will be assessed a time penalty of 30 seconds (up to one penalty/beer or 6 penalties total).  What determines a drip vs. spill will be at the digression of the onlookers and The MANGUSTA organizers.  Puking is allowed with no penalty so long as the beer was consumed.  Puking unconsumed beer will constitute a spill.  Each team of two must consume all 6 beverages in any number, order or fashion they see fit.  While subtle foam left in the can will be expected, any substantial quantity of beer left over (at the discretion of onlookers and The MANGUSTA organizers) will be assessed a 30 second spill penalty.  In the event there is a tie, a heads up, one beer/person beer chugging contest will break the tie.  Any cheating or breaking of the aforementioned rules will be disqualified for this event and all future MANGUSTA’s.  The top 5 teams will be awarded points accordingly.  In the event less than 5 teams actually finish the challenge, only those who finish all 6 beers will be rewarded points.  Any and all disputes will be handled by The MANGUSTA organizers, all decisions final. 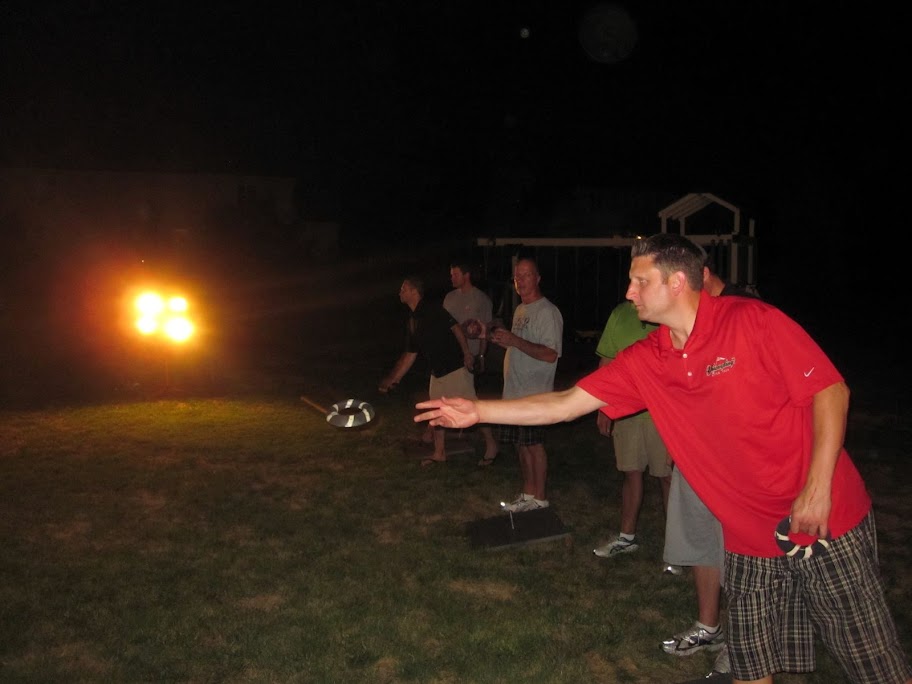 Names drawn at random to create teams of 2.  Each team will play in a round robin tournament challenging each other team once.  Final scores of each game shall be recorded by the winner and verified by the loser.  The team with the best record will determine the winner.  Any ties will be broken by the score of heads up play.  Any 3 way tie will be decided by overall point differential.  The top 5 teams will be awarded points accordingly.  Any and all disputes will be handled by The MANGUSTA organizers, all decisions final.  Understanding there are several variations and “house rules” with regard to quoits, The MANGUSTA will be adhering to the following rules: 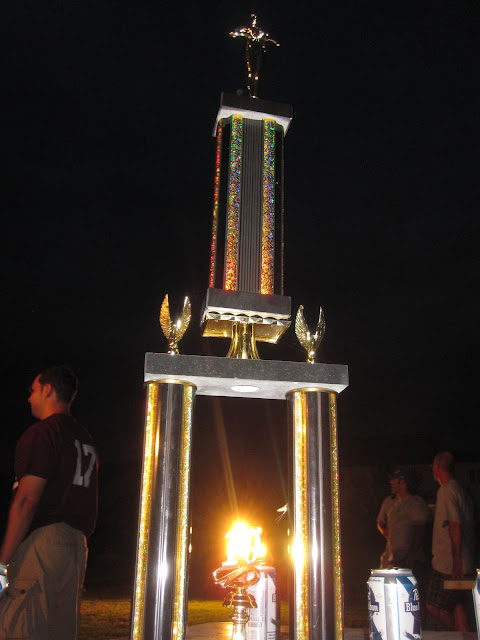 Though the events will be played out in a team format, the single Man with the highest cumulative score across all 4 events will be declared the 2011 Mangusta Champion.  A personalized trophy/plaque will be awarded to the winner and it will be his to keep for one year.  After one year, the standing Mangusta Champion will defend his title and put his trophy at risk for the 2012 Mangusta.